Vietnam, officially called the Socialist Republic of Vietnam, is located in Southeast Asia and has a population of nearly 100 million. This makes Vietnam one of the sixteen most populous countries in the world. Its population has doubled in the last 40 years. Vietnam’s capital is Hanoi in the north. The largest city in the south is Ho Chi Min City, formerly Saigon.

Vietnam is on the Indochina Peninsula and shares borders with China to the north and northeast and Cambodia and Laos to the west. The country has a long coastline to the east, where it borders the Gulf of Tonkin and the South China Sea. The Mekong Delta and the Red River Delta are among the largest rice plantation areas in the world. Because the country is so elongated, there are different climate zones, with tropical areas in the south to relatively cool regions in the north.

The Vietnam War ended in 1976, after which the former North and South Vietnam were merged to form a people’s republic led by the Communist Party Vietnam. Since 1986, political and economic reforms have seen the country become increasingly involved in international diplomacy and the global economy, experiencing high economic growth, though not evenly spread across all areas and all sections of the population.

There are more than 50 different ethnic groups. The Vietnamese-speaking “Kinh” form the largest group at about 85%. They live as farmers in the countryside, fishermen along the banks of rivers and coasts, traders, civil servants, teachers, scientists, etc. Dozens of ethnic minority groups with their own language and culture mainly populated the mountainous areas in the past, often leading an itinerant existence. 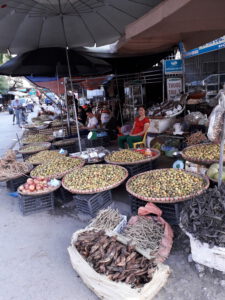 After the end of the war in 1976, the living situation for these minority groups changed dramatically. There was a large migration from the heavily populated north and the big cities to the forest lands of the highlands. Rural “Kinh” also needed more and better farmland. Clearing of forests in the Northern Highlands, mining, plus internal migration flows had major impacts on rural and urban life.

Ethnic minority groups lost increasingly more land and forest that they considered their habitat as a result of this development, and for them a difficult period of conversion and upheaval began. They could no longer lead the life they were used to: an austere itinerant existence, living off and in the forests, with their own subsistence culture of dry farming, gathering fruits, weaving clothes, their own musical traditions.

Among ethnic groups, poverty was growing rapidly, the forced adaptation to ‘modern’ life was accompanied by much misery. Fortunately, social and pastoral workers became increasingly aware of the economically disadvantaged position of ethnic minorities and stood up for the people. 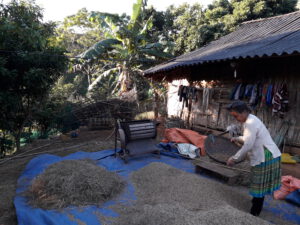 In helping the poorest people in Vietnam, Lien Doi uses existing networks from religious quarters, such as parishes, Caritas and Buddhist monasteries. Naturally, as a foundation, we try to ensure that we spread our projects as much as possible. Most projects are aimed at ethnic minorities, but poor farmers of Khin origin can also appeal to us. With our projects, we support the people we work for in finding a way of life that suits their current situation, and their aspiration to find their own full place in society.